Ten years, more or less, seems to be all the tolerance that Canadians have for their Governments.  At least, that is what we must assume, given our total surprise at the extent of the Liberal electoral victory last October.  In fact, as things evolved through the campaign, it seemed rather more likely that we would see the NDP holding the balance of power, in a Tory minority government.  NDP leader Thomas Mulcair must have believed it, too, as he was quoted making statements that were generally quite friendly (or at least conciliatory) to business.  That left the Liberals to carve out more extreme positions during the campaign, in order to distinguish themselves from the throng.  END_OF_DOCUMENT_TOKEN_TO_BE_REPLACED

It’s time again to file your personal tax returns. The deadline keeps changing – this year, those returns must be filed with the Canada Revenue Agency by no later than Monday May 2, 2016.

We’d like to deliver the finished product as quickly and efficiently as possible – and we’re sure that many clients will, as of today, already possess all the information that’s needed (much of the most relevant data may already be on our system – we usually just need the ‘small stuff’, and other items, to tie everything together). So, we’d like to encourage everyone to consider the “practical” deadline as really being early April – there’s little reason for any later than that!

To help us help you, organization is the key! This newsletter contains a few items to help you accomplish your annual filing obligation with as little trouble and expense as possible.

END_OF_DOCUMENT_TOKEN_TO_BE_REPLACED 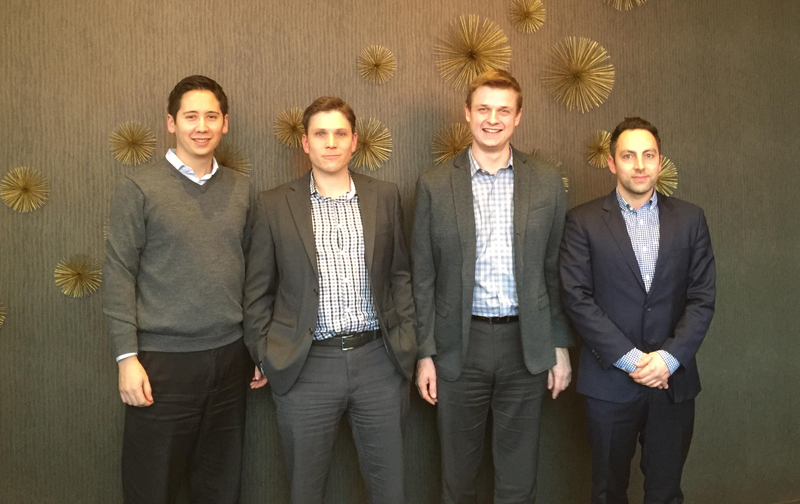 Lohn Caulder would like to congratulate Stephen Koke on successfully passing the first ever Common Final Examination.  Stephen, we are extremely proud of your accomplishment and are looking forward to your successful career as a Chartered Professional Accountant!

Submitting Your Personal Tax Information to the ‘Cloud’

Readers will recall that in January we announced a new “cloud”-based service, which allows clients to submit their bookkeeping data to a secure site on the Internet. That facilitates the transfer of large electronic data files very easily. Already many clients have used this system, and we’re receiving very positive feedback about it.

Thus encouraged, we now plan to expand the cloud program to the personal tax season.

It’s become a fact of life that many information slips ‘trickle’ in over the months of February and March, making it a nuisance for clients to accumulate everything in an envelope, and submit information only when it’s fully complete.

END_OF_DOCUMENT_TOKEN_TO_BE_REPLACED

Opting out of CPP Premiums

We have noted that more and more of our clients are working well past what would normally be considered “retirement age”.

Of course, economic need is often the motivation. But we know, in most cases, that’s not the reason – most of these individuals can afford to retire, now. They simply don’t want to.

Without exploring the sociological issues that may be relevant in this decision, we are left with the fact that many persons age 60 or over have chosen to remain working, even though they may have decided to draw on their CPP early (which remains their privilege, although they must suffer a discount for doing so).

END_OF_DOCUMENT_TOKEN_TO_BE_REPLACED

The term “cloud” is used these days to refer to places on the Internet where data relevant to you or your business is stored. As computerization has spread throughout our lives, and become much more portable, much of our important information can be vulnerable to accident or theft.

As the capacity of the Internet increases, the cloud offers a solution to the problem of data security, so long as it can be made safe and secure.

Lohn Caulder now provides a free and secure portal for clients that makes it easy to upload electronic data to us, via the Internet.

END_OF_DOCUMENT_TOKEN_TO_BE_REPLACED

We at Lohn Caulder are very excited about our newest corporate addition: LC Bookkeeping Inc.

LC exists because we’ve been listening to our clients – and know that there’s a big demand out there for quality bookkeeping services. Until recently, our standard service delivery model hasn’t completely fit the needs of monthly or quarterly bookkeeping clients, but no longer.

With LC Bookkeeping, bookkeeping is all they do. So, you get a person on the line who is completely facile with the ‘ins and outs’ of all of the major software accounting packages, and comfortable with the maintenance and reconciliation of accounts receivable and accounts payable subledgers, posting of regular journal entries, and all manner of recurring accounting functions.
END_OF_DOCUMENT_TOKEN_TO_BE_REPLACED

It’s pretty difficult to imagine what a movie about an accounting firm might be like, but why wonder: take a look at the video that our consultants, ‘Video in Vancouver’, came up with. You might be surprised.

It’s easily launched from the main page of our website: www.lohncaulder.com.

More and more, we are seeing clients and other businesses discovering for themselves what a powerful marketing tool the Internet can be – and with videos, you have an excellent opportunity to ‘make your pitch’ to a very wide audience, at basically zero cost.

END_OF_DOCUMENT_TOKEN_TO_BE_REPLACED

Tax-Free Savings Accounts Get Another Boost

The TFSA may turn out to be the greatest gift ever given to the Canadian taxpayer. All it needed to do was grow up. And that, it’s rapidly doing.

The program began humbly enough in 2009, allowing all Canadians age 18 or over the opportunity to contribute $5,000 per year (non-deductible). Now, recognizing the inflation protection built into the TFSA rules originally, the Federal Government has announced that 2013’s contribution limit (and all future years) will be 10% higher, or$5,500.

END_OF_DOCUMENT_TOKEN_TO_BE_REPLACED

During the summer of 2011 there was a significant amount of media attention directed towards the IRS’ Offshore Voluntary Disclosure Initiative (OVDI). This brought to light the fact that there is a staggering number of U.S. citizens, living in Canada, that are not up to date with their U.S. filing obligations (all U.S. citizens must file annual returns to the U.S.). The media attention focused on the potential penalties for failure to become compliant, with a focus on the “FBAR” (Form TD F 90-22.1 Report on Foreign Bank and Financial Accounts) penalties.

Many of these individuals chose to enter into the 2011 OVDI program by the September 7, 2011 deadline, which granted reduced penalties for late filed FBAR forms.

Another option that many others chose (where they had no U.S. tax liability) was to simply file past due U.S. individual income tax returns and FBAR forms (normally 3 to 6 years of overdue tax returns) and “hope for the best”.
END_OF_DOCUMENT_TOKEN_TO_BE_REPLACED

To get updates on important tax information and articles from our thought leaders, sign up for our newsletter.